Camas coach Jon Eagle said this year’s team is one of the best he has had going into a season. That’s high praise. Photo by Mike SchultzBiggest offseason news: The recruitment of Caadyn Stephen is special. Offers from so many big colleges, including most of the Pac-12. But here’s the thing: He is just one of several top-notch offensive linemen. Two others, Rush Reimer and Tai Tumanuvao, made all-league last year. Reimer says he will sign with Montana State. Tumanuvao is getting looks from colleges. So, too, is Tristan Souza. The coach said he does not want to go as far as saying it is the best line in Camas history, but it is certainly one of the best lines.

Caadyn Stephen is one of the top college recruits in the Northwest. He is one of several players who are college-level talent on the Camas offensive line this season. Photo by Mike SchultzAt stake in 2019: 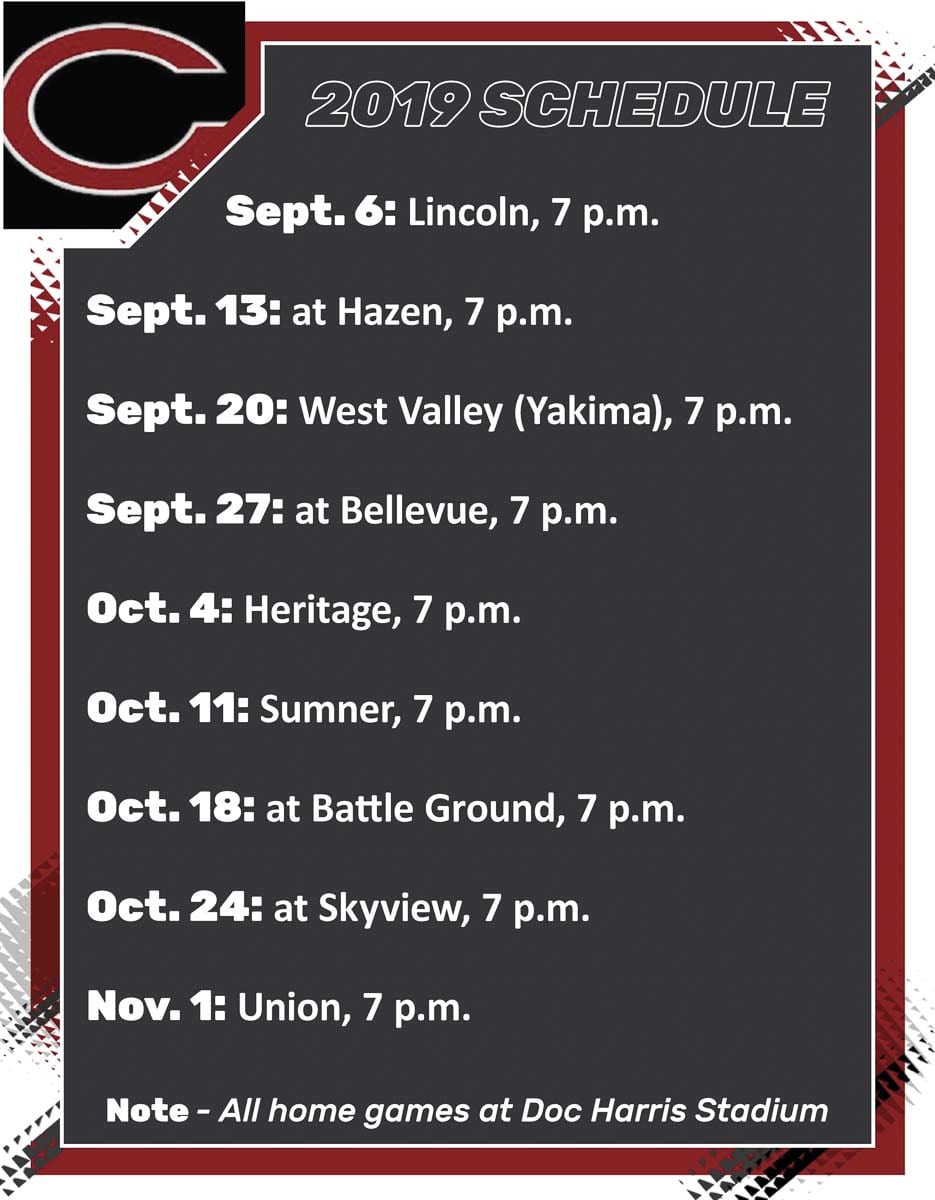 To prove that 2018 was a fluke. The program had lost a total of five games combined in the previous five seasons. Oh, and more numbers show the 2018 season was fluke-ish. The Papermakers lost their five games by a total of 20 points and in all five games the Papermakers had the ball late, in scoring position, with a chance to tie or take the lead. Yes, we know, we know, winners win, and that’s the bottom line. However, there are exceptions. The 2018 Papermakers were the exceptions. They were a statistical anomaly. With so many returners knowing how close the Papermakers came to a special season, don’t be surprised to see a return to the top. Spring/Summer standouts and stories: Jackson Clemmer and Charlie Bump were two guys who impressed Eagle with breakout spring and summer play. Clemmer is the tall wide receiver who knows how to use that height to his advantage, and Bump is a slot receiver who made some great catches and loves to make people miss. The Papermakers no longer attend team camps at colleges. Instead, they do most of their work on campus or in the area scrimmaging some of the other top teams in the area. As far as team building, the plan this August was for a kickball tournament. Big-time bragging rights on the line.

The Papermakers look cool, practicing in the shade. Camas, which has finished second in the 4A GSHL the past two seasons, is hoping to return to the top of the league this year. Photo by Mike SchultzSkill position players of note:Jake Blair played a lot of quarterback last season for the Papermakers. Now a junior, he has made some huge steps in the development of his game. Eagle said he is “better in command” of the position.

Jake Blair got a few starts and plenty of reps at quarterback as a sophomore last year. That experience, as well as another year to get stronger, has helped him become more confident going into his junior season. Photo by Mike SchultzJacques Badolato-Birdsell. A very dynamic running back. A physical running back, too. Can get that extra yard. Eagle said a quarterback’s best friend is a good running game. The Papermakers should have that with that great offensive line and this strong back.

Camas running back Jacques Badolato-Birdsell and the Papermakers have their eyes on a big prize this year. They want to be league champions, and more, in 2019. Photo by Mike Schultz Tyler Forner is an all-league returner, but he is changing positions. He shined as a defensive back last year. This season, he’s moving to linebacker. A “big-time player,” Eagle said. Jackson Preston returns as well. He was a starting linebacker in 2018.Jack Gibson was injured and did not play last year. Eagle said he would have been a starter, though. Now, he should get his chance as a hybrid linebacker/defensive lineman. Linemen of note: Caadyn Stephen. A who’s who of linemen in the Northwest. Here’s a college offer. Here’s another. And another. But all that attention just motivates him more. “He works very hard at his craft,” Eagle said. “He really wants to be good at it.”Rush Reimer: Another strong, big, fundamentally strong lineman who will be playing at the next level.Tristan Souza. Did a great job of shedding “bad weight,” according to Eagle, and putting on extra muscle. He moves better and is stronger.Tai Tumanuvao. Eagle said Tumanuvao was the best center in the league last year.

The Camas Papermakers are focused on proving that last year was a fluke, with five close losses. Photo by Mike SchultzCoach Talk:  “We’ve had a lot of good teams here, and I just think this is one of our better ones,” Eagle said. “We have a lot of expectations. We have a tough schedule. Same as last year. I’m looking forward to getting back at it.” Biggest games on the schedule:In the 4A GSHL, nothing is bigger than the Union game. But wow, there are some big games throughout this schedule. Remember, Camas lost to Lincoln by two points last year, by three points to Bellevue, a touchdown to Sumner, and a touchdown to Union. The Papermakers would love to avenge all of those.AdvertisementThis is placeholder textTags:CamasCamas Papermakers 2019Clark CountyHigh School Football 2018Latestshare 0 Previous : Rainer Springs to hold Continuing Education training in Salmon Creek Next : Skyview Storm Preview 2019AdvertisementThis is placeholder text